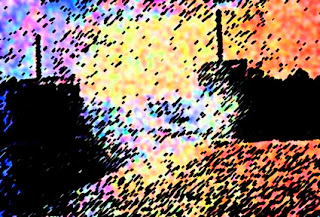 The operator of Fukushima Daichi nuclear power plant, Tepco, is struggling every day to contain the accident. But the more they try, the more new problems occure. Recent weeks we have been hearing about highly radioactive water seeping into the ocean. And there are millions of liters more to come.

Tepco doesn't tell everything they know and everything they should tell to Japanese authorities and international organizations having the role of a watchdog of the nuclear industry. And what is the most important they deny the right to know what is going on there from the great audience, Japanese citizens and people everywhere in the world. This is not a Japanese matter any more, this is a global catastrophe, an event that is affecting somehow every single human being on this planet earth.

Let me explain a little bit.

Senior cheaf engineer of Fairewinds Energy Education and former executive of nuclear industry Arnie Gundersen estimated a few weeks ago that whole the Pacific Ocean would have in five years 5 to 10 times as much man made radioactive isotopes such as cesium 134, Cs137, Sr90 and plutonium  as it had after the nuclear weapons testing during 1950ies - 1970ies. Whole the water mass of our largest ocean will be radioactively contaminated by crippled Fukushima plant. That will cause whole the ocean food chain to be contaminated for decades. And hundreds of millions even billions of people are and will be affected. And statistically even low level radiation will cause hundreds of thousands or millions of people getting genetic damage, cancer and other health problems, some of them lethal. But it takes decades and the connection between radioactive contamination and getting sick is hard to prove. It can be seen statistically but is it enough?

I wrote this upper first part of this blog post as a draft almost two months ago, but the situation has not been changing any better by now. The contaminated water keeps on flowing to the Ocean - although Prime Minister Abe keeps on telling us the tainted water is all contained in the harbor of Fukushima Daichi (scientists say 40% of the water in harbor is mixed with the ocean sea water daily) and no-one have injured because of the Fukushima nuclear accident and never will (still huge increase in thyroid gland cancers have been found among the children and youth in Japan after FD-accident). And the situation is fully under control. So says Mr. Abe. Three out of four Japanese citizens and most of the experts disagree with him. But at least he got the Olympic Games 2020 in Tokyo. Well, if the city will not be evacuated by then!

There is a real risk of huge radioactive fallout in addition to the 300 to 400 tons of tainted water seeping daily to the ocean now. The removal of spent fuel from the badly damaged spent fuel pool of reactor 4 is a very risky business. According to nuclear power specialists it may cause uncontollable criticality or a prompt criticality explosion if two nuclear fuel rods move too close each other during the removal, or corroded nuclear fuel rods or racks break and the fuel pellets drop to the bottom of the pool. This is all because of bended and corroded fuel racks and rods. And Fairewinds Cheaf Engineer Arnie Gundersen said that Tepco had admitted that the protective Boron of fuel rods had decayed away - adding Boron in pool water doesn't protect against unintented criticality if fuel rods get too close to each other. And the result of this could be radioactive fallout  over 15 000 times more severe than that of the Hiroshima bomb, or 50-100 times as severe as Chernobyl. Fukushima Daichi (and Daini) could be forced to be abandonned because of extreme radiation. And then the cooling down of reactors and all spent fuel pools could be compromized. Tokyo and half of Japan would be in danger to be evacuated. And the fallout would be worldwide.

Tepco is to begin the removal of those fuel rods in October - November this year.

The former Chairman of NRC Mr. Gregory Jaczko was giving a Speech yesterday in Japan. He was also commenting this  harsh situation at Fukushima Daichi NPP. The speech can be watched here:

Let's hope the worst scenario doesn't happen! International help is needed in Japan. Tepco can't cope with such a huge task to decommission six reactors, spent fuel ponds and one thousand leaky tanks of contaminated water - and 300 tons of tainted groundwater contaminating the ocean each day. Nor doesn't the Japanese government seem to be able to handle the situation. The time is running short.