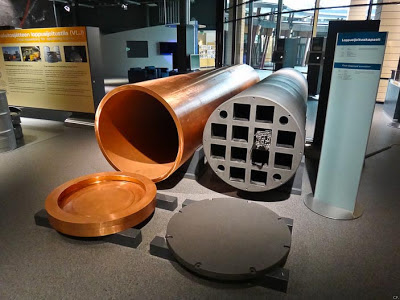 
Swedish corrosion researchers at KTH in Stocholm have found out that the thick copper canisters that are planned to be used for safely burying spent nuclear fuel of Finland and Sweden deep in the bedrock are not as corrosion safe as the companies planning the nuclear waste caves claim. According to recent Swedish studies the capsules can corrode thousands of times faster in anoxic water than the nuclear industry predicts on their own studies. Recently, after having checked out the swedish studies, STUK (Finnish nuclear safety official) has asked Posiva for further explanation. The Swedish research group led by Peter Szakálos found that copper capsules would last only about 1000 years instead of 100 000 years calculated by Posiva and Swedish nuclear waste depositing company  SKB.

There are also open questions about bentonite - the clay layer around the copper cylinders - how it reacts with ground water or if it gets frozen during the next ice ages. STUK is ivestigating the possible weaknesses of this nuclear waste depositing process before giving their final green light for the project.

100 000 years is a long time. I agree with nuclear engineer Arnie Gundersen: it would be easier for the engineers to solve the problem how to store solar or wind energy over one night than to try to work out how to store highly radioactive waste for hundreds of thousands of years. 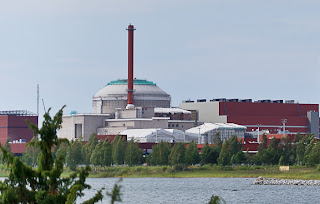 Olkiluoto-3 EPR in Finland will cost at least 8,5 Billion Euros. It will never be profitable. (Photo: Jukka Seppälä/Creator's Fingerprints)

Today the price of Finnish TVO Olkiluoto-3 EPR nuclear reactor project was updated to 8.5 Billion Euros, at the same level as its sister reactor under construction in Flamanville, France.

Just recently the Italian Company ENEL was withdrawing from the French EPR -project because of extremely high costs, constantly rising. This last update rose the costs of a single EPR reactor with 2 Billion Euros, which is more than a half of the projects original price estimate of 3 Billion Euros. So the reactor is now estimated to cost roughly 3 times the original price-estimate.

But does the rising of the costs finish here. Personally I believe that this reactor type will cost at least 10 Billion Euros to be ready to generate energy. If the trend of rising costs continues and the costs that follow from European stress tests for nuclear reactors will be fully recognized 10 Billion may not be  an overestimate. The complicated new tecnologies that are to be developed during the construction of the reactor and updated according to new data of safety issues will be really demanding economically.

But even if we take this 8.5 Billion Euros as a realistic price and add fuel and maintenance costs, decommisioning the reactors (300 million to 3.7 Billion Euros depending who is making the calculations) and hundreds of millions of Euros to safely (?) bury the nuclear waste and spent fuel, we'll end up in a sum huge enough to make some comparison with renewables.

The electric power generating capacity of Olkiluoto-3 (and Flamainville reactor) would be 1600 MW, so it would be the most powerful (experimental) nuclear reactor in the world. If we take large 4,5 MW Wind generators, we need 356 of them to generate the same amount of power on windy days at optimal locations. But if we think more realistically we would need 1068 - so three times that much - these windmills to generate the same amount of power yearly.

Now we could make some calculations. If we take 1068 of these mills and start producing energy with them, we have the ability to ask, which is more economical and safe as investment? Those mills would be at the present price-level about 5 Million Euros per unit, so the total price would be about 5.34 Billion Euros for total capacity of 4806 MW which is equivalent to a single 1600MW nuclear power plant that costs now at least 8,5 Billion Euros.

Or then we could read some Finnish studies about the subject to make our own conclusions.
In 2009 there was made a cost comparison between different energy generation methods. The study found nuclear power to be the cheapest alternative. But when you read the study more carefully and the statistics of power generating costs, you'll end up to a conclusion that Olkiluoto-3  and Flamainville EPR-reactors will be economically catastrophal for their owners (and in the end for the tax-payers).

The study made in Lappeenranta Technical University by Essi Ahonen 2009 showed the lowest power price for a new nuclear power plant of 1500 MW and 4.1 Billion Euros to pay back the investment during its 40 years economical plant life to be 35 Euros / MW. The recent estimates of power price on nordic markets tell the price to sink to 34 Euros / MWh next year and even to 25 Euros / MWh year 2018. And there is a 50% chance that power price would be about 20 Euros / MWh during the last quartal of 2013 if Olkiluoto-3 starts production. Last year the average price for selling power was 46,1 Euros / MW.

The cause of decreasing trend of power prices in Nordic countries seems to be miscalculations of available generating capacity and use of electricity because of dry and cold years 2010 - 2011. The long lasting trend of sinking power prices was forgotten for a while. And now building of large scale wind power capacity as well as huge NPPs like Olkiluoto-3 are creating over capacity which is pushing the prices down. Also decreasing energy consumption due to change in our basic industrial structure is causing power price to go down.

So you don't have to be an economist to see what is happening to companies that build new nuclear power capacity. They will be bankcrupted if they continue with their projects. If a NPP needed 40 years to pay back investments with 35 Euros / MW power price and 4.1 Billion Euros investment, how could a NPP like Olkiluoto-3 or Flamanville do that with 25 Euros / MW power price and 8,5 Billion Investment? According to my mathematics it will be a MISSION IMPOSSIBLE!

It would be cheapest to stop all construction work at Olkiluoto-3 and Flamanville -sites and decommission these projects permanently. Perhaps we could modify these plants to realtively safe spent fuel storage sites while searching for better solutions. If they will continue these NPP-projects they will find out that every single generated MW will be increasing their economical loss. But Finns are famous to have SISU. But in this case I would call it STUPIDITY. Let's hope we have learned something as a nation!

Last weeks 7.4 on Richter scale earthquake (updated from 7.3 to 7.4 afterwards) and a 1 meter tsunami made it clear to everyone that the danger of new wide spreading radioactive releases still exists at Fukushima Daichi and surprisingly also at Fukushima Daini nuclear power plant that is situated a few miles south of F. Daichi.

The earthquake made some kind of nuclear reaction to occur in Fukushima Daichi reactor 1 causing hydrogen levels in torus room and containment vessel to spike up. Nuclear engineers are concerned of situation though hydrogen levels haven't reached explosive mixture yet.

But the dark secret of TEPCO remain unsolved: what is the damage for the reactor core for Fukushima Daini reactors or even to Fukushima Daichi reactors 5 and 6 that have not been widely discussed publicly. The pressure of the containment vessel of Daini reactor 1 was increased after the recent earthquake and at least senior nuclear engineer Arnie Gundersen supposes some core damage have occurred in Daini reactor number 1 and perhaps in Daichi reactors 5 and 6 also. He came to this conclusion after having read the data of loss of cooling times after the tsunami had destroyed the possibility to cool down the reactors effectively. Loosing the diesel generators may have caused some core damage to F. Daini reactor 1 and this was perhaps causing the pressure increase also after the last week EQ.

Geologists have warned of a possible new earthquake of 8 on Richter scale to occur at the same region as last weeks EQ. That kind of quake could trigger a new nuclear disaster if the spent fuel pools couldn't stand the force of it. The fuel could run dry and overheat causing a significant fallout and make controlling of the  reactors very difficult or even impossible. That could mean a world wide fallout much more severe than Chernobyl was.

We can only hope and pray the worst scenarios not to happen. Meanwhile, we could learn something of the mistakes of the past.